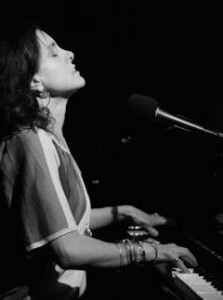 Eden moved to New York from Massachusetts in 1993 where she held various day jobs while performing in small clubs at night. She earned a reputation as one of the area’s most engaging live performers playing the industry’s most venerable clubs up and down the east coast. Consequently, in 1995 her talents were recognized by the producers of the stage adapted Emmy award winning TV series, “School House Rock Live,” where she became the musical director. Soon thereafter, she was awarded a coveted performance slot in the Songwriter’s Hall of Fame Songwriter Showcase.

White managed to build a large fan base by selling out top venues, which supported the release of her critically acclaimed self-released EP “Here I Am.” By 1998 Eden was an established talent in New York City songwriting circles and was chosen as the winner of the prestigious New York City Lilith Fair Acoustic Talent Search. This opportunity, which included opening for Sarah McLachlan in Bryant Park and Lilith Fair itself at Jones Beach, led to an eventual record deal with Touchwood/Zero Hour and the release of her debut CD, “This is the Way.”

The album received airplay throughout the United States and solidified her standing as a powerful female singer-songwriter. Immediately prior to the release of her second album, “What Really Matters,” her label went out of business. However, White was able to release it under her own label, Delirium Records, and it too was met with critical acclaim.

White transitioned her music career during the 2000’s from performing to artist development, working in A&R at Capitol Records. Much of her time was spent working at Blue Note, the historic jazz label where she coordinated projects for many of the top jazz artists in the world. A particular highlight was working as A&R coordinator under the legendary Arif Mardin. The most notable project during her time at Blue Note was the recording and release of Norah Jones’ debut smash, “Come Away With Me.”

White left Blue Note when she welcomed her first child, Ava, into the world in 2003. Her second daughter Maya was born in 2006. Although she continues to perform at select charity events and artist showcases in New York, White has pursued creative avenues that don’t require travel. As such, she began producing music for independent films and commercials and collaborating on special studio and theater projects. Armed with a degree in child psychology from Tufts University and a Masters in Music, Marketing and Education from the Gallatin School at NYU, White has also collaborated on several music education projects including the Johnny Mercer Song Book – a musical guide to Mercer’s catalog that is taught in schools throughout the United States.

Currently, White is primarily focused on bringing an original, full-length musical titled “Forty! The Musical. A Slice of Midlife Crisis” to the stage. Forty! The Musical incorporates White’s pop sensibilities with the larger-than-life sweeping sounds found only on the Great White Way.