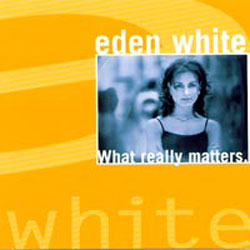 “She blows everyone else off the stage, wherever she goes” – (Timothy White, Billboard Magazine, editor-in-chief)

Consistently referred to as ‘the female Billy Joel’, this Lilith Fair Artist rocked the nation with her mezmerizing piano skills. In 1998, her first CD, ‘This Is The Way’, was released to international acclaim by Billboard, Parade Magazine and Hollywood Reporter.

Now, with her second self-produced release, ‘What Really Matters.’, Eden follows in the piano pop/rock tradition, with an entirely new repetoire of songs, pushing the musical boundaries of classic rock with her intensely layered vocal harmonies. The array of musicians and engineers on the project include those who’ve worked with Billy Idol, Luna, Sarah Brightman, Joni Mitchell, Celine Dion and Fountains of Wayne.

We guarantee if you’re rarely moved by ‘burgeoning artists’, you will be by this one. For those of you who are starved for the return of the ‘classic artist’, this array of pop, rock, blues, wit and lyricism is for you. . With blitzing hooks that will sink into your soul, to intense ballads that free it, it’s a ‘must have’ for your musical library.

‘Piano Based’ Female Rock N Roll – Reminiscent of Billy Joel, Elton John and Carole King…. As stated by Timothy White, Editor -in Chief of Billboard Magazine “…she blows everyone else off the stage wherever she goes”

Love it! The best!
Eden White makes a stunning comeback in this follow-up CD. I was skeptical of the CD before I listened to it because her first CD was to good to have a second CD as good. It is totally awesome!

An amazing blend of music styles!!
The CD is absolutely amazing! I could listen to it over and over again! It is a wonder follow-up to her first album, “This is the Way”. A personal favorite of mine is “Twirling”! I love it. The music on the CD is much-like Sheryl Crow’s styles. You’ll fall in love with her music! Don’t miss out!

The Best!
There are very few CDs that I can listen to in full. Usually, I have to skip a track or two because I don’t like them much. But this CD I listen to straight through. Over and over. Because she’s a genius.

Best Artist Nobody Has Heard Of
I picked up this album at Borders based on their in-store review comparing her to Tori Amos. The review was totally wrong. The only things Eden shares with Tori are gender and excellence. Eden has a totally different voice. If you can compare her with anyone it would be Billy Joel — they have a similar mix of being serious and not.

AMAZING!
This CD will be in your player 24/7! I have heard most of these songs live and if they are half as good recorded as they are live, this CD will be your new fav! Fall is love with EDEN WHITE!

Great stuff
I didn´t imagine finding such great songs so easily in internet.